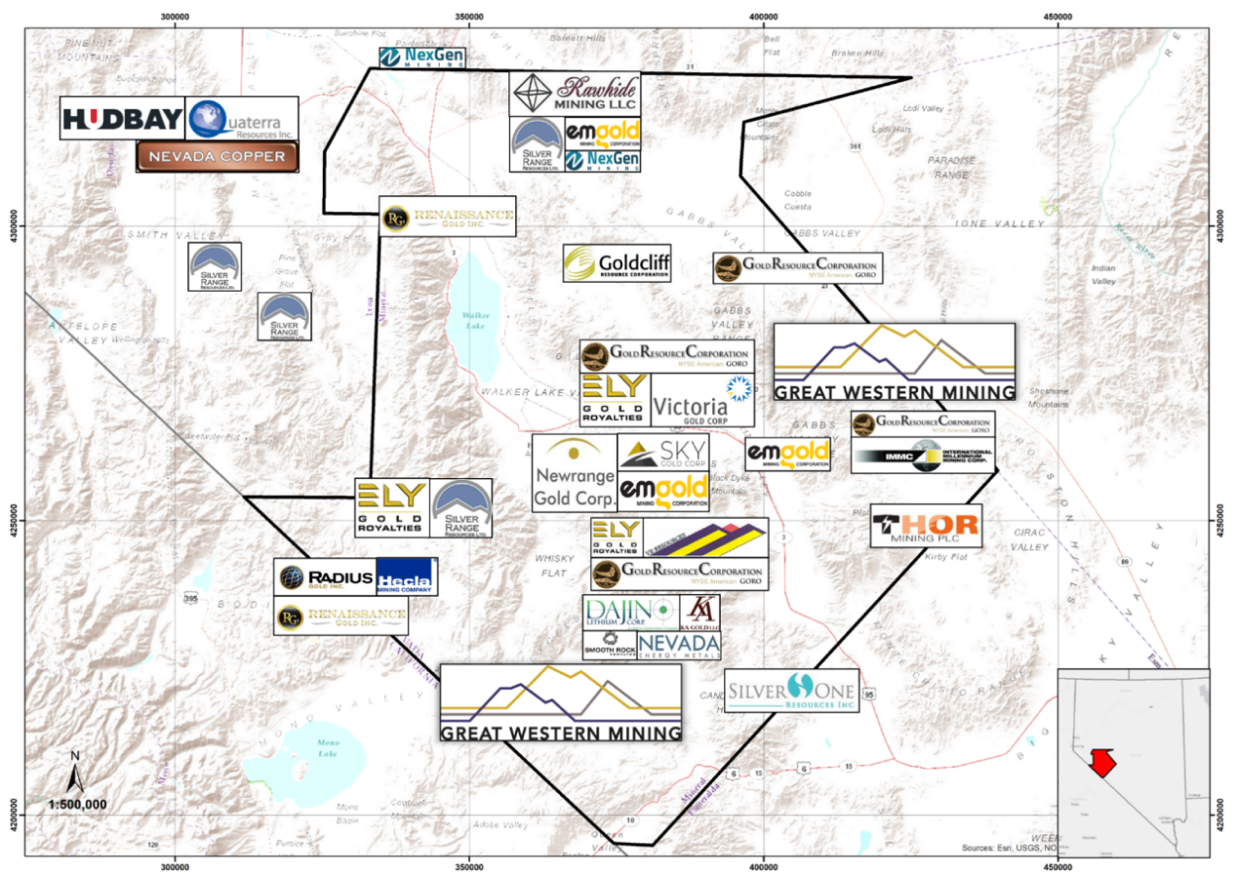 Mineral County, Nevada covers 9,876 km², slightly smaller than the English county of Yorkshire, and has a population of around 6,000 people.  Its mineral potential is hosted by the regional Walker Lane Structural Belt, which is the largest structural and metallogenic belt in Nevada, yet one of the least explored in recent times. Gold, silver and copper are currently produced in Mineral County.

In any jurisdiction other than Nevada, the discovery of Walker Lane would have been the most significant exploration event in its history, given how well endowed with mineralisation it is.  However, in Nevada, where the Carlin Trend bends to the east and north of Walker Lane, and can claim to be the most famous gold-bearing trend in the world, Walker Lane has tended to be overshadowed.

The Walker Lane hosts a number of richly endowed mines, including Comstock, Goldfield, Tonopah, Paradise, Bodie and Round Mountain, as well as countless historical workings all over the area.  Within Mineral County itself are the Candelaria, Rawhide & Aurora mines.  To date the part of Walker Lane which lies in Nevada has accounted for nearly 47 million oz. of gold production and 430 million oz. of silver. (Sillitoe study, 2008) 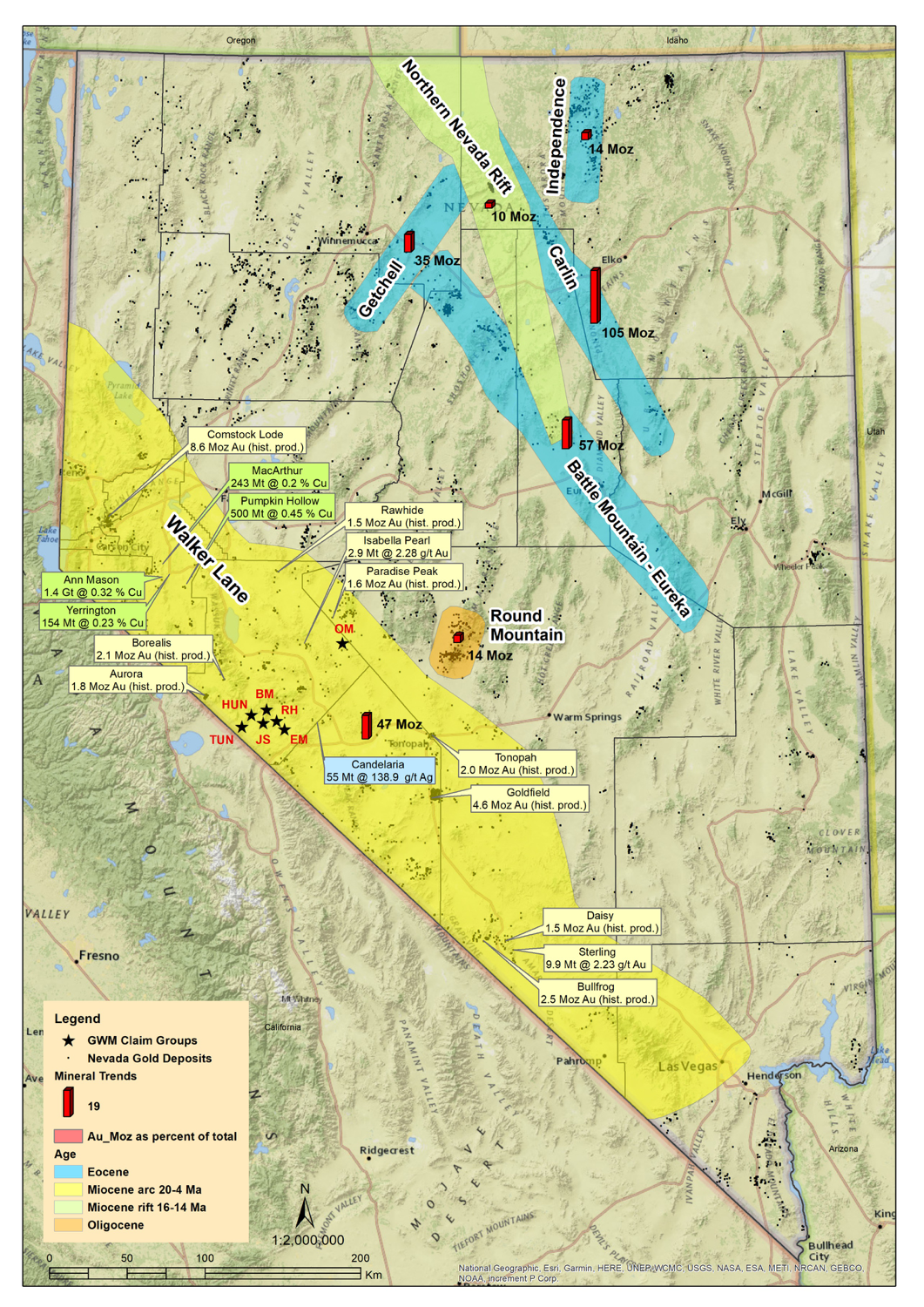 Map of Nevada highlighting Great Western’s position relative to major metallogenic belts in the state and their gold content. Notable gold deposits of the Walker Lane Belt are highlighted. (Metallogenic belt gold content is extracted from Sillitoe, 2008. Historical production stats are extracted from Barnett & Williams, 2006. Measured and Indicated resource stats are taken from DigiGeoData.com and relative company websites as of August 2020.)

Striking over 800km NW-SE on the Nevada-California border, the active incipient transform fault is host to a wide range of mineral deposit types and styles, containing both base and precious metals.  Today, the area is home to major, world-renowned mining operators as well as mid-sized and junior exploration companies which capitalise on untapped resources or, in some cases, use modern exploration technology to achieve further recovery from historic mining operations.

Structural deformation of the belt is accentuated within Mineral County by the Mina Deflection, where NW-SE faulting is cross-cut by E-W dextral strike-slip faults to form further countless overprinting shear zones which are ideal for ore grade mineral development. 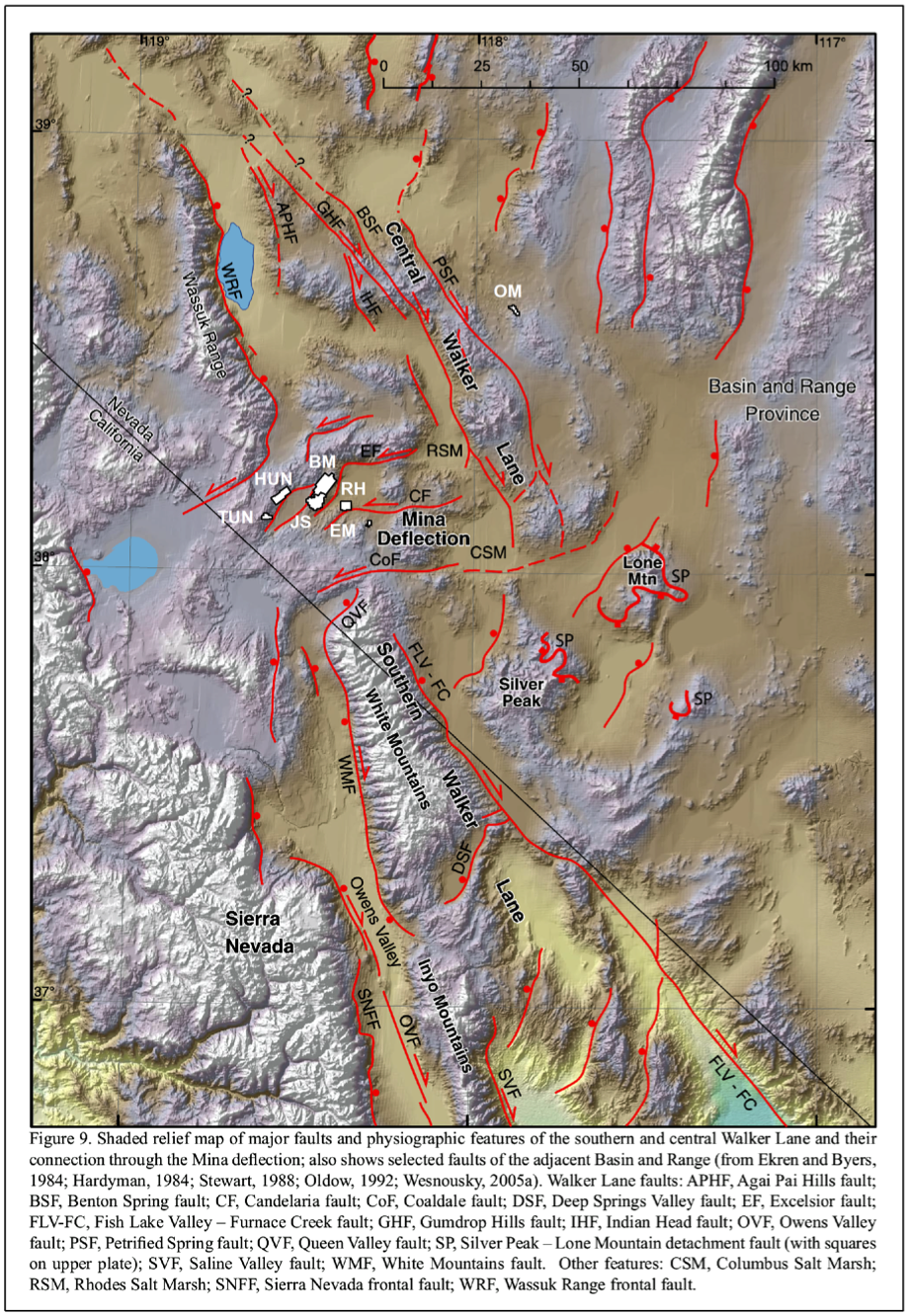 All Great Western’s mining claims are located in Mineral County and a table of our neighbours is shown below, together with a project map.

ACTIVE MINERS IN AND AROUND MINERAL COUNTY, NEVADA 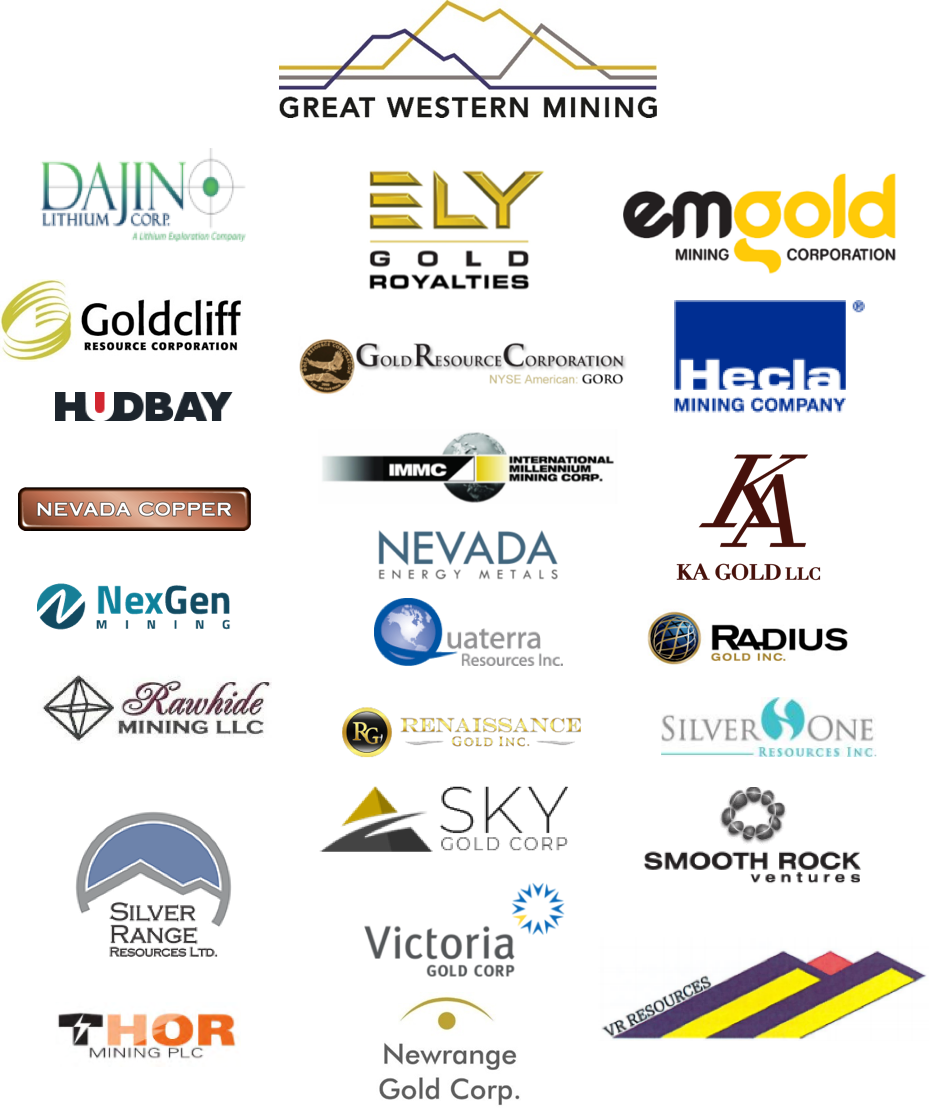 MINING PROJECTS IN AND AROUND MINERAL COUNTY, NEVADA 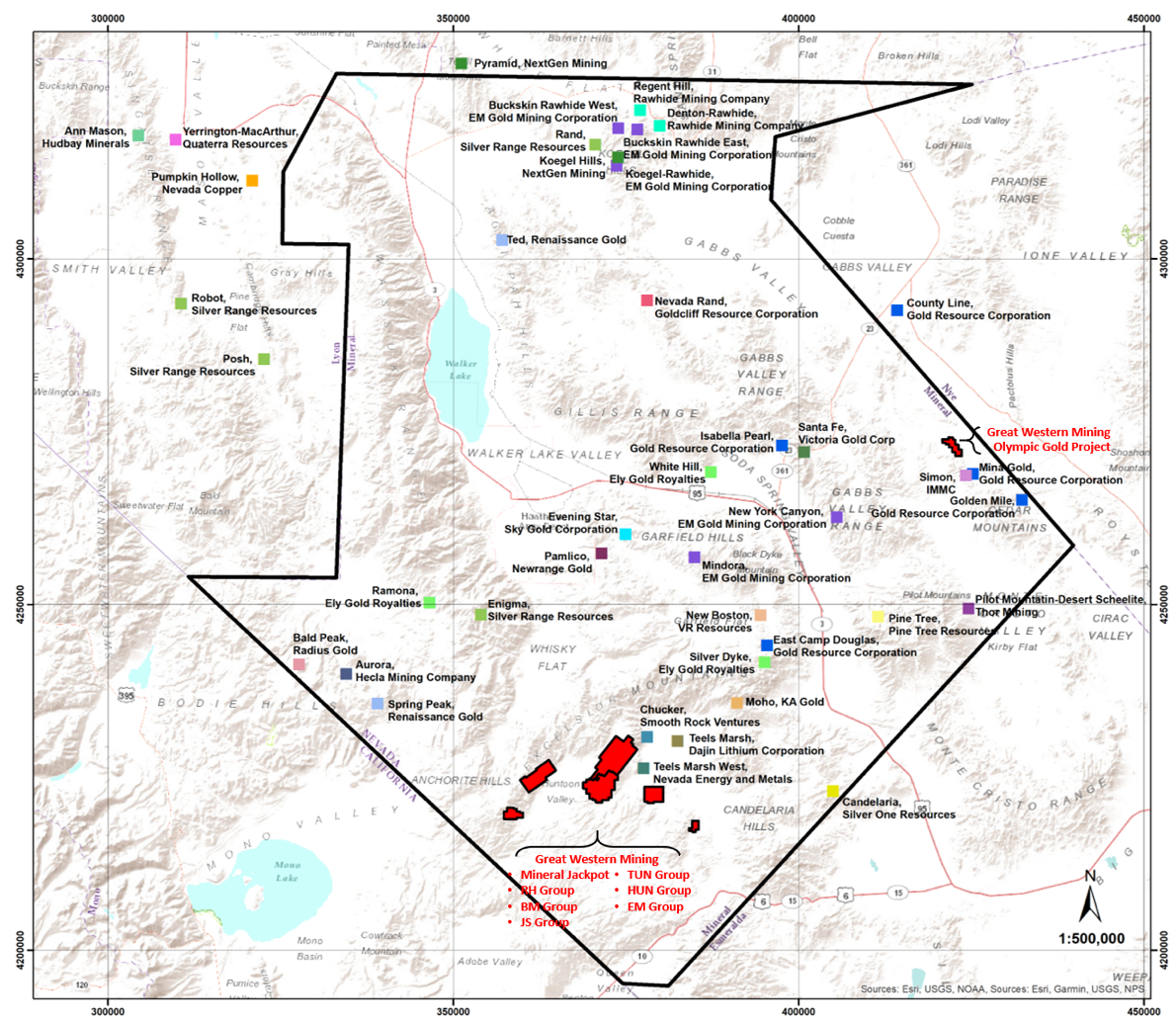